www.SnowBikeNation.com is dedicated to the Growing Hobby and Sport of Snow Bikes. Converting from a dirt bike in the summer to a Snow Bike in the winter!

Get this podcast on your phone!

Episode #3 - Riley Will of BRC Racing Discusses the BRC 500cc 2 Stroke Engine - This is A Snow Bike Game Changer!

Tune in for one of the most exciting Snow Bike episodes as we talk with Riley Will of BRC Engineering about his revolutionary 500cc 2 Stroke Engine built on the KTM 250 or 300 engine and KTM chassis. This episode was recorded on August 2018 so it's been in the warehouse for a while!

In this episode, we also discuss the V-Twin 600 Engine which was a prototype Riley developed for Timbersled. The idea was to be first to snow with a purpose-built SnowBike rather than a kit. Unfortunately, Polaris bought Timbersled and the V-Twin never made it to market. The engine made 120hp, 78.5ftlbs and was as narrow as a single cylinder. Perfect for a SnowBike! Riley got a patent for the drivetrain on a single ski and track snow vehicle hoping that in the future the OEMs will go this route.

Here is the BRC 500cc Engine in Snow Bike Form!

The BRC 500cc 2 Stroke Engine is like nothing the world has ever seen before! Riley Will and his team at BRC Engineering have achieved something truly revolutionary for the Dirt Bike world and in particular, we at Snow Bike Nation are most excited about its application as a Snow Bike! 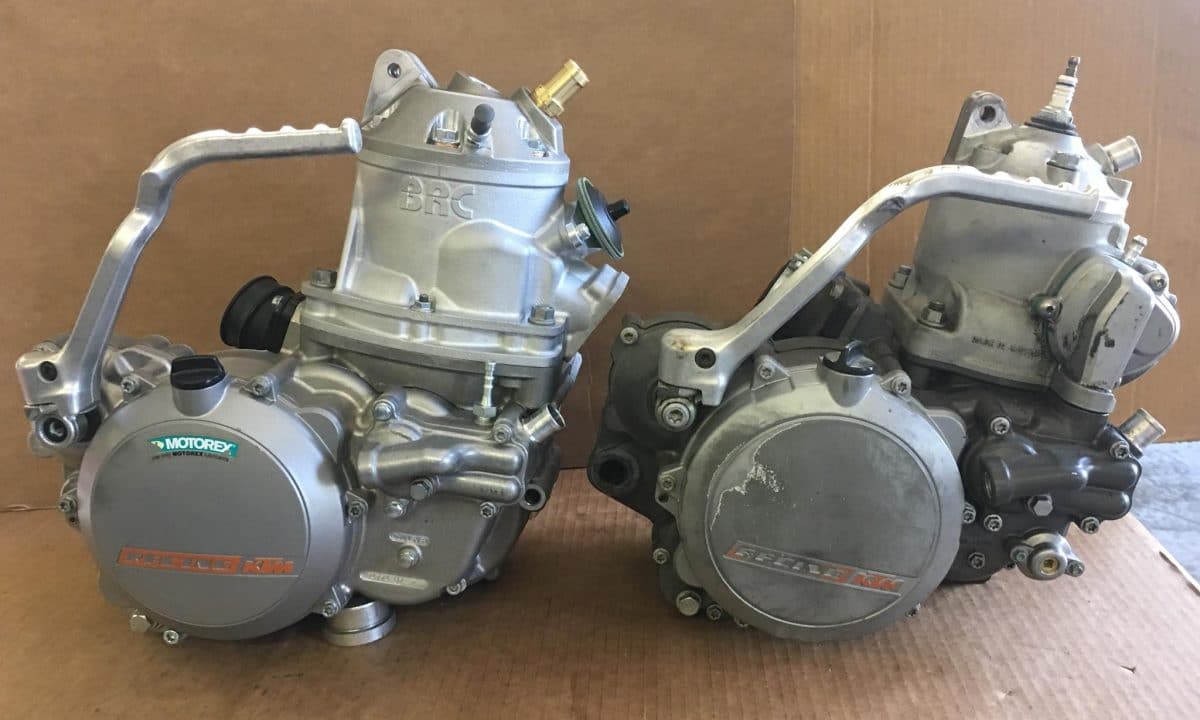 "In a side by side comparison, you can see the straightforward design approach of the BRC 500cc and the comparison with the stock donor engine. Weight distribution remains comparable and rotational inertia is far less than that of a big bore four stroke." https://dirtbikemagazine.com/brc-ktm-500cc-2-stroke-conversion-two-stroke-tuesday/

THE KIT COSTS $5635 IN U.S. DOLLARS OR $7500 IN CANADIAN DOLLARS. THE KIT INCLUDES EVERYTHING YOU NEED TO BUILD THE ENGINE, INCLUDING BEARINGS, SEALS, GASKETS, FITTINGS, FASTENERS AND EVEN THE DYNO-TUNED FMF PIPE AND SILENCER.

You can order the engine directly from their website though I recommend giving BRC a call to discuss the details and make sure they have some available! http://brcracing.ca/

These warhorses that were made for the men among men were forgotten over time. Big-displacement two-strokes took riders with finesse and a few screws loose to tame them. Now, in a world populated by heavy, complex, 450cc four-stroke engines that pump out 60-plus horsepower off the showroom floor, the 500cc two-stroke doesn’t seem as intimidating to ride as it once did. Riders like Sean Collier and Tyler Bowers have shown that these 500cc beasts can be manhandled. In recent years, the 500cc two-stroke market has been booming, and without any manufacturers producing these big-bore engines, the used 500cc market has exploded. New parts are few and far between and used parts only last so long. This is why the BRC Engineering team came together to find a solution to the problem." Based in Calgary, Alberta BRC Engineering specializes in the design and manufacture of premium high-pressure flow control products for the oil and gas industry. BRC Engineering has its roots as a full-service machine shop and continues to provide CNC machining, CMM inspection, precision assembly, and pressure testing services to customers in the energy, agriculture, forestry, mining, medical, defense, aerospace, and motorsports industries.

Founded in 1996 by Brian Will, BRC Engineering is now run by his sons, Carter and Riley, who manage a team of talented personnel, including professional engineers, design technologists, and journeyman machinists dedicated to providing world-class solutions. BRC Engineering’s state of the art computer-aided design and manufacturing equipment, combined with strict quality control procedures ensures superior product quality with on-time delivery.

Riley was a Kart racer growing up and they started a Kart Racing shop where they imported products from Europe and supplied the local and North American Kart racing market. In 2002 they sold the kart shop and focused on manufacturing engines as part of our business. Motorsports had been a smaller part of their business until recently.

Check out this awesome video from Dirt Bike Magazine with an interview of Riley Will and to see the BRC 500cc 2 Stroke Engine in action! 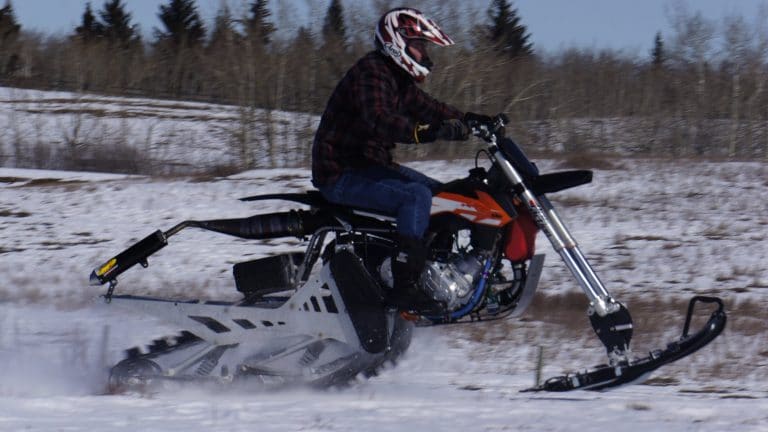 "I am personally very excited about the possible application of the BRC 500cc Engine on a snowbike and I hope I get to try it soon!" - Kyle Allred

For more information about BRC Racing and their Engine check out the below links.

Leave your comments and let us know what you think about the BRC 500cc engine.

This was one of the most fun and exciting interviews I've had the pleasure of conducting. Jeff Peinhart, co-founder of PR2 racing http://pr2racing.com/ has an extensive motorcycle and engineering background. PR2 provides one of the best ECU's for fuel injected bikes and developed of the first snow bike specific ECU maps.

Here's a bit more about PR2 from their website

"PR2 Racing Technology’s reputation for engine research and development, repair work, excellent customer service, and performance is second to none. Over the years we have invested in the very best in state-of-the-art engine building and testing equipment.

Our level of service prepares bike for top level professional riders and amateur riders from all over the world."

Jeff is a Mechanical and Aeronautical Engineer and handles the engine division at PR2
PR2's ECU maps have helped win multiple supercross and motorcross titles.
From the likes of
Along with 20-30 other top riders
Timbersled approached PR2 in 2013 to providing the tuning on the ECU for them.
We're gonna discuss how and why he designed the mapping for the ECU's, why it's so crucial if you have a fuel injected bike to have one for optimal riding of your snow bike.
We discuss new products released for the Snow biking community. Like widening of the throttle body for an increase in horsepower.
A few key takeaways we discuss:

There is so much to this podcast I know you will enjoy it!

Check out PR2 racing in the following ways.

Call or email Jeff direct and let him know you heard him on Snow Bike Nation. He's a great guy to speak with:

Thanks for listening and your support.

If you like the podcast and would like to show your support and appreciation please head over to our Patron page. We have an initial goal to help cover the costs and grow from there! https://patron.podbean.com/snowbikenation

This episode is a quick introductory about Kyle and how he came to be involved in the awesome and fast growing powersport of Snow Biking.

In it I'll cover why I started Snow Bike Nation and what you the listener will get from this podcast.

Strap in as I embark on this ambitious project with the World's FIRST Ever Snow Bike Podcast.

For more content, special member only stuff, clothing, giveaways, videos and more visit www.SnowBikeNation.com and make sure to enter your name and email to always stay up to date!

And if you like the podcast and would like to show your love and support please head over to our Patron page. We have a small initial goal to help cover the costs and then grow from there! https://patron.podbean.com/snowbikenation

Play this podcast on Podbean App